INFORMATION for Ukumbwa Sauti and CODY COYOTE (Below). 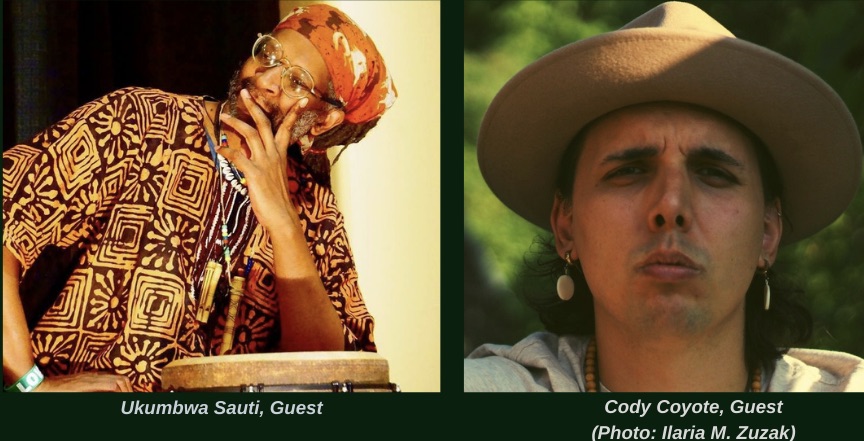 Ukumbwa is an initiated Elder in the Dagara tradition from Burkina Faso in West Africa. He is a diviner, numerologist, and spiritual counselor. Ukumbwa is a Producer and Partner at Moja Mediaworks, developing the World Ancestor Concert, and facilitating Social Justice workshop experiences along with forwarding progressive messaging through online merchandising. Ukumbwa presents discussions and workshops through the Men’s Work initiative, engaging patriarchy and men’s violence against women and the LGBTQ community. He has taught Cultural Media Studies and Video Production for 17 years in higher education; and has been active in the Pan-African movement, Black Lives Matter and other anti-racism work and the Occupy/Decolonize to Liberate movements. Ukumbwa has presented at spiritual conferences and political events in the New England region, California and Barbados; and has been active in creating ritual work in Boston, New York and Toronto. He can be reached for bookings and consultation on Facebook, Twitter and email at ukumbwa@gmail.com. Find his current work at www.worldancestorconcert.com, on Facebook and other Global Media Network platforms.

In the second half-hour, Tiokasin welcomes back Cody Coyote. Cody is a multi-award nominated and award-winning hip-hop and electronic artist. He is Ojibwe and Irish descent with ancestry from Matachewan First Nation in Ontario. In January, Cody’s award-winning song, “Manidoo Dewe’igan” hit #1 on the Indigenous Music Countdown in Canada, and has since lead to the creation of this project in partnership with FACTOR — The Foundation Assisting Canadian Talent On Recordings, The Government of Canada, Ajax Creative and ZYK Marketing. With his fusion of strong, profound lyricism accompanied by corresponding influential sounds, Cody grasps his listeners’ attention and delivers a mesmerizing performance. Cody’s latest single is “Two Worlds.” Outside of music, Cody is also a motivational speaker, workshop facilitator, and is the Host of “The Beat” on 95.7 ELMNT FM in Ottawa, Ontario. Cody can be found on Facebook, Twitter and Instagram. His website is https://www.codycoyotemusic.com/.