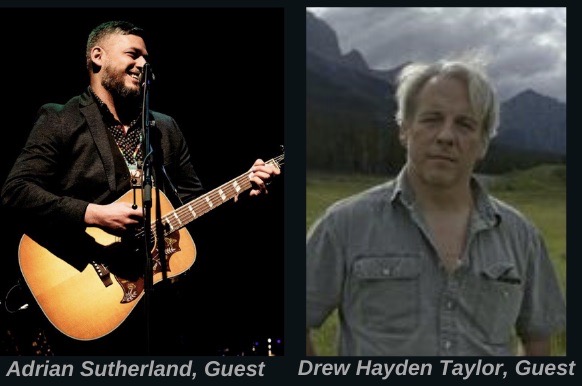 ADRIAN SUTHERLAND. Adrian comes from Attawapiskat on the remote coast of James Bay, Ontario, Canada. He’s a singer, songwriter, musician, recording artist and frontman and founder of the roots-rock band Midnight Shine. Adrian is a fluent speaker of his Cree language. He’s a respected cultural leader; practices traditional ways of the land; and is a genuine example of someone who lives authentically. Adrian is a father of four; grandfather of four; and the hard-working husband; proud of who he is and where he comes from. Adrian’s award-winning first debut single/music video, “Politician Man,” a protest song, recently garnered the prestigious Golden Sheaf Award from the Yorkton Film Festival, North America’s longest-running film festival, established in 1947. The seeds of the song were planted last July when Sutherland’s community of Attawapiskat declared a state of emergency over contaminated water. “Politician Man” recently claimed #1 on the Indigenous Music Countdown, Canada’s internationally-recognized “Top 40” music chart. The video has been viewed more than 45k times on YouTube and is being played on radio stations in North America, Germany, Switzerland, the UK, and Australia. On June 30, Midnight Shine released “James Bay,” a fully remastered and reimagined version of their debut album of the same name. More information at https://midnightshineonline.com/.

DREW HAYDEN TAYLOR. During the last 30 years of his career, Drew has done many things, most of which he is proud of… An Ojibway from the Curve Lake First Nations in Ontario, Drew has worn many hats in his literary career, from performing stand-up comedy at the Kennedy Center in Washington D.C. to being Artistic Director of Canada’s premiere Native theatre company, Native Earth Performing Arts. Drew has been an award-winning playwright, a journalist, and columnist, appearing regularly in several Canadian newspapers and magazines; a short-story writer; novelist; television scriptwriter; and has worked on numerous documentaries exploring the Native experience. Most notably as a filmmaker, he wrote and directed REDSKINS, TRICKSTERS AND PUPPY STEW, a documentary on Native humor for the National Film Board of Canada, and for CBC, co-created SEARCHING FOR WINNITOU, an exploration of Germany’s fascination with North American Indigenous culture. His new documentary film is COTTAGERS & INDIANS. In the film, Drew dives into both sides of an argument that is threatening to explode. Drew deliberately plays on the phrase “cowboys and Indians” in this exploration of the challenges of reconciliation, and themes of decolonization. The film delves into the tension between resolving centuries of injustice, and the desire to move forward peacefully. Drew’s film will premiere in Canada on CBC POV on July 4. More information about Drew: https://www.drewhaydentaylor.com/