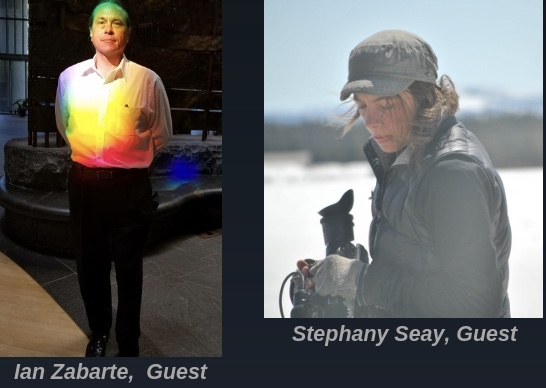 In the first half-hour, IAN ZABARTE is Principal Headman of the Western Bands of the Shoshone Nation. In 2018, he was appointed to the Licensing Support Network Advisory Review Panel of the U.S. Nuclear Regulatory Commission.

In the second half-hour, STEPHANY SEAY (www.buffalofieldcampaign.org) was born in the Outer Banks of North Carolina and raised in Virginia. She became aware of this culture’s capacity for mindless destruction as the beaches and forests she grew up in were destroyed by so-called development. Stephany has been an earth activist since the late 1980s, has apprenticed as a wildlife rehabilitator, and is a student of horses. She started following the work of the Buffalo Field Campaign in 1997. In January 2004, she moved to Montana and has been on the front lines with the Buffalo Field Campaign ever since. Stephany has been a member of Deep Green Resistance since 2015 and stands in solidarity with those—human and non-human—who want to bring an end to industrial civilization and the culture that is killing our planet.