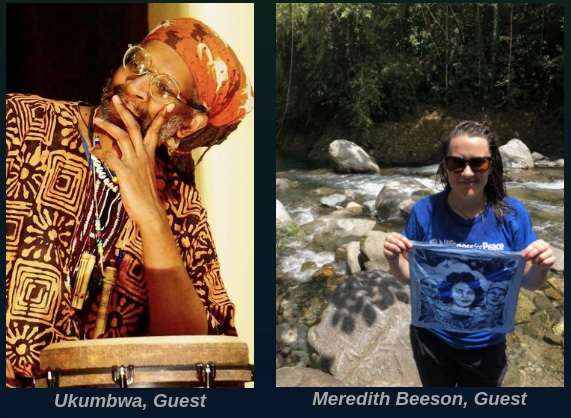 Ukumbwa Sauti is an initiated Elder in the Dagara tradition from Burkina Faso in West Africa. He is a diviner, numerologist, and spiritual counselor. Ukumbwa is a Producer/Partner at Moja Mediaworks, developing the World Ancestor Concert and facilitating social justice workshop experiences along with forwarding progressive messaging through online merchandising. He has taught cultural media studies for 16 years in higher education. Ukumbwa created a blog entitled "Indigeny & Energetics," outlining in part, the history and effects of Christianity in the Indigenous and modern world and the persistence of the elements of religious privilege and predatory missionary work. Ukumbwa also has been active in the Pan-African movement, Black Lives Matter and other anti-racism works and the Occupy/Decolonize to Liberate movements. He has presented at spiritual conferences and political events in the New England region, California and Barbados; and has been active in creating ritual work in the Boston, New York and Toronto, Canada. Ukumbwa can be reached on Facebook, Twitter, and email at ukumbwa@gmail.com. Find his current work at www.worldancestorconcert.com, on Facebook and other Global Media Network platforms.

Meredith Beeson is a state and local government affairs professional living in the Minneapolis and Saint Paul, Twin Cities, area with a deep passion for civic engagement and community activism. After being laid off her corporate job in 2017, Meredith participated in a human rights solidarity trip to Honduras to deepen her understanding of U.S. influence in Central America. As a member of this media-makers delegation to Honduras, Meredith had the opportunity to learn more about the deep connections between current social, economic, and political issues in Honduras and the influence of U.S. policy in the region more broadly. In addition to her new explorations of international issues, Meredith has worked in city, state, and federal levels of government. Her passion for civic and community engagement has led her to volunteer at KRSM (a low-powered community radio station in South Minneapolis); serving as Vice Chair of the Minnesota Humanities Center Board of Directors, and volunteering at a local community garden program focused on food justice issues.