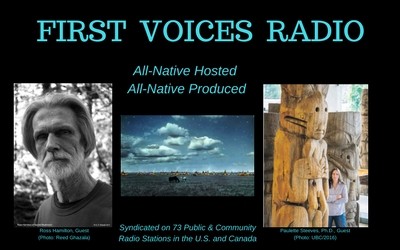 Tiokasin Ghosthorse catches up with Ross Hamilton. Ross is the author of several books on Native American prehistory including: "The Mystery of the Serpent Mound," "A Tradition of Giants," and "Star Mounds: Legacy of a Native American Mystery." His research specialty is the lost and forgotten history of North America and her ancient legends that seem to revolve around a profoundly mysterious country that once dominated the landscape known from oral tradition as Turtle Island.

In the second half of the show, Tiokasin welcomes back Paulette Steeves. Paulette Steeves (Cree-Métis), Ph.D., was born in Whitehorse Yukon Territories and grew up in Lillooet, British Columbia, Canada. She is an Indigenous (Cree-Métis) archaeologist with a focus on the Pleistocene history of the Western Hemisphere. In her research Dr. Steeves argues that indigenous peoples were present in the Western Hemisphere as early as 60,000 years ago, and possibly much earlier. She has created a data base of hundreds of archaeology sites in both North and South America that date from 250,000 to 12,000 years before present, which challenges the Clovis First dogma of a post 12,000 year before present initial migration. Dr. Steeves received her BA in Anthropology, Honors Cum Laude from the University of Arkansas at Fayetteville, and completed a two year internship with the Quapaw NAGPRA program during her undergraduate studies. In 2008 Dr. Steeves was awarded the Clifford D. Clark fellowship to attend graduate studies at Binghamton University in New York State. Dr. Steeves’ dissertation, "Decolonizing Indigenous Histories: Pleistocene Archaeology Sites of the Western Hemisphere" is the first dissertation framed in Indigenous Method and Theory in Anthropology within the United States. In 2011 and 2012 she worked with the Denver Museum of Nature and Science to carry out studies in the Great Plains on mammoth sites which contained evidence of human technology on the mammoth bone, thus showing that human were present in Nebraska over 18,000 years ago.
Dr. Steeves has taught Anthropology courses with a focus on Native American and First Nations histories and studies, and decolonization of academia and knowledge production at Binghamton University, Selkirk College Fort Peck Community College, Indigenous Archaeology at the University of Massachusetts at Amherst, and served as the Director of the UMASS Amherst Native American and Indigenous Studies certificate program. She is currently an assistant professor in Anthropology at Mount Allison University in Sackville, New Brunswick, Canada.​